By Jackie French and Bruce Whatley

Pile the presents by the tree
Though clouds spiral out at sea.
Wind snarls, skies weep grey
But Santa’s sleigh is on its way!

Christmas Eve 1974 is marked indelibly into the Australian psyche as the night tropical cyclone Tracy devastated the city of Darwin.

Now, over 40 years later, Jackie French’s lyrical rhyming text tells the story of a city’s indomitable spirit, and Bruce Whatley’s sumptuous illustrations bring to life the powerful force of the storm to a whole new generation of readers.

Follow-up to the Children’s Book Council of Australia Honour Books Fire, Flood and Drought by this popular Australia duo. 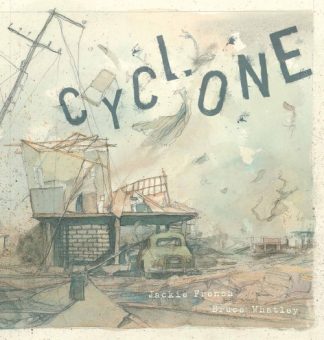