A picture book with humour and heart for everyone who has ever felt like they’re on the outside looking in.

Molly asks Jerry his opinion. She shares things with him. She laughs with him. She sees him. And it’s then that Jerry realizes he can pay her gift forward, as there are plenty of other kids who feel invisible too. Best-selling author Adam Wallace was inspired to write Invisible Jerry after hearing children talk about never being passed the ball in sports games. Or being at a party where no one spoke to them. Or who felt their opinion didn’t matter.

In today’s busy, cliquey world, there are lots of people (kids and adults) who can feel like they’re on the outside looking in. This is a picture book with humour and heart, written for them – to show them that there are people out there who will see them, who will recognize their talents, and see how worthy they are. It’s also for Adam himself – the shy kid who never felt brave enough to put himself out there, but who was lucky enough to find people who lit him up and made him realise that he had plenty to offer and that, if he was patient, the right people would see him. 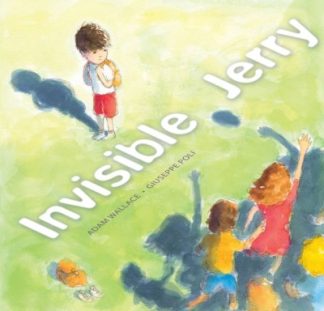