n a very fine house, on a very grand street, Lived the tiniest mouse you could possibly meet. The youngest of twelve, he was timid and slight, But he was always, ALWAYS very polite.

When tiny Horatio Squeak is invited to a mysterious party at the top of the stairs, he finds himself in the unexpected company of kittens with dreadfully bright teeth and dreadfully sharp claws. Despite their intimidating appearance, the kittens are welcoming hosts who seem to enjoy Horatio’s company. But when they spot a bird in the window, they cannot resist the urge to catch it. As Horatio watches on with horror, he finds the courage to speak out and save the scared bird. With his newfound bravery, Horatio returns home feeling stronger and not nearly so small.

About the author:
Karen Foxlee is an Australian author who writes for both kids and young-adults. She grew up in the Australia outback mining town Mount Isa and still frequently dreams she is walking barefoot along the dry Leichhardt River. One of four children she started telling stories when she was young. She filled countless small exercise books with sweeping sagas of orphaned girls illustrated with pictures cut from the back of Readers Digest magazines. Her award-winning novels include Ophelia and the Marvellous Boy, A Most Magical Girl and Lenny’s Book of Everything. Horatio Squeakwas her debut picture book. Karen lives in South East Queensland with her daughter and several animals, including two wicked parrots who frequently eat parts of her laptop when she isn’t looking. Her passions are her daughter, writing, day-dreaming, baking, running and swimming in the sea.

About the illustrator:
Evie Barrow is an artist and illustrator, living in Melbourne. In 2019 her debut picture book, Horatio Squeak, written by Karen Foxlee was published. In 2020, Evie will be publishing three new picture books with authors, Penny Harrison, Kat Patrick and Maggie Hutchinson. Along with children’s book work, her illustrations have featured in frankie magazine, Broadsheet press, Flow magazine and in the book Shout Out to the Girls. 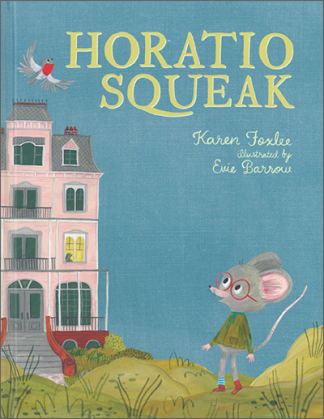 You're viewing: Horatio Squeak $25.16
Add to cart
Don't forget to assign your users