The Smeds and the Smoos

by Julia Donaldson and Axel Scheffler

Soar into space with this glorious love story of alien folk, from the creators of The Gruffalo and Stick Man.

The Smeds (who are red) never mix with the Smoos (who are blue). So when a young Smed and Smoo fall in love, their families strongly disapprove. But peace is restored and love conquers all in this happiest of love stories. There’s even a gorgeous purple baby to celebrate!

Julia Donaldson was born in 1948. She grew up in London and studied Drama and French at Bristol University.
She worked for a few years in publishing and as a teacher, while also writing and performing songs and street theatre with her husband Malcolm, and writing and directing two musicals for children. She then combined a career writing songs for children’s television with bringing up a family.
In 1993, one of her songs was made into a book, A Squash and a Squeeze. Since then she has written over a hundred books and plays for children and teenagers, including the award-winning rhyming stories The Gruffalo, Room on the Broom, The Snail and the Whale and Zog, all illustrated by Axel Scheffler, which are among the UK’s best-selling picture books. 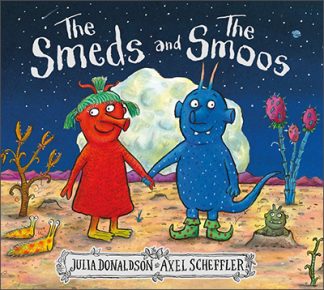 You're viewing: The Smeds and the Smoos $22.46
Add to cart
Don't forget to assign your users