Finding the Heart of the Nation

This is a book for all Australians.

Since the Uluru Statement from the Heart was formed in 2017, Thomas Mayor has travelled around the country to promote its vision of a better future for Indigenous Australians. He’s visited communities big and small, often with the Uluru Statement canvas rolled up in a tube under his arm.

Through the story of his own journey and interviews with 20 key people, Thomas taps into a deep sense of our shared humanity. The voices within these chapters make clear what the Uluru Statement is and why it is so important. And Thomas hopes you will be moved to join them, along with the growing movement of Australians who want to see substantive constitutional change.

Thomas believes that we will only find the heart of our nation when the First peoples – the Aboriginal and Torres Strait Islanders – are recognised with a representative Voice enshrined in the Australian Constitution.

The Children’s book ‘Finding Our Heart’ also by Thomas Mayor has been developed to share the importance of this story with children. Find it here.

‘Thomas’s compelling work is full of Australian Indigenous voices that should be heard. Read this book, listen to them, and take action.’
– Danny Glover, actor and humanitarian

Thomas Mayor is a Torres Strait Islander man born on Larrakia country in Darwin. As an Islander growing up on the mainland, he learned to hunt traditional foods with his father and to island dance from the Darwin community of Torres Strait Islanders. In high school, Thomas’s English teacher suggested he should become a writer. He didn’t think then that he would become one of the first ever Torres Strait Islander authors to have a book published for the general trade. Instead, he became a wharf labourer from the age of seventeen, until he became a union official for the Maritime Union of Australia in his early thirties. Quietly spoken in character, Thomas found his voice on the wharves. As he gained the skills of negotiation and organising in the union movement, he applied those skills to advancing the rights of Indigenous peoples, becoming a signatory to the Uluru Statement from the Heart and a tireless campaigner. Following the Uluru Convention, Thomas was entrusted to carry the sacred canvas of the Uluru Statement from the Heart. He then embarked on an eighteen-month journey around the country to garner support for a constitutionally enshrined First Nations voice, and a Makarrata Commission for truth-telling and agreement-making or treaties. Thomas’s journey continues, both in person and through the pages of this book. The book is his gift to the campaign for Voice, Treaty and Truth. Like the Uluru Statement from the Heart, he hopes that all Australians will accept it. 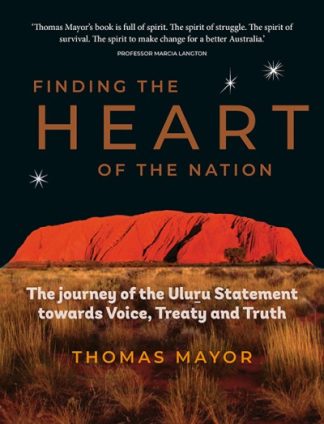 You're viewing: Finding the Heart of the Nation $39.95
Add to cart
Don't forget to assign your users