By Amy McQuire
with Matt Chun

Day Break is the story of a family making their way back to Country on January 26. We see the strength they draw from being together, and from sharing stories as they move through a shifting landscape. The story refocuses the narratives around ‘Australia Day’ on Indigenous survival and resistance, and in doing so honours the past while looking to the future. Confronting yet truthful, painful yet full of hope, Day Break is a crucial story that will open up a conversation on truth-telling for the next generation.

Amy McQuire is a Darumbal and South Sea Islander woman from Rockhampton in Central Queensland. Amy is a freelance writer and journalist, and is currently completing a PhD at the University of Queensland into media representations of violence against Aboriginal women.  Amy began her career straight out of high school, completing a cadetship at the National Indigenous Times (NIT) newspaper. She later became editor of NIT, and for a short time political correspondent for NITV News. Amy has also worked at Tracker Magazine, New Matilda, Brisbane’s 98.9 FM – where she presented the ‘Lets Talk’ current affairs show – and more recently BuzzFeed News Australia. Over the past four years, Amy has co-hosted the investigative podcast ‘Curtain’ with human rights lawyer Martin Hodgson. The podcast puts forth the case for innocence for Aboriginal man Kevin Henry, who was wrongfully convicted in 1992.

Amy has a strong interest in writing about justice, culture and heritage and feminism.

Matt Chun is an artist and writer, currently based on unceded Tsleil-Waututh land / Vancouver, Canada. Living, travelling and creating with his 9-year-old son, Matt’s work spans text, drawing, sculptural installation, children’s books and comics. Matt is the current Children’s Literature Fellow at the State Library of Victoria in Naarm / Melbourne. He is also the current 4A Centre for Contemporary Asian Art’s Emerging Writer. Matt’s first picture book – Australian Birds – was released in 2018 and is a Children’s Book Council of Australia Notable Book. Matt’s essays have appeared in Overland Literary Journal, Meanjin Quarterly and Runway Journal. He is currently writing texts for Art Monthly Australasia and Liminal Magazine. 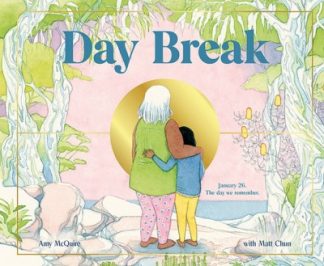 You're viewing: Day Break $24.95
Add to cart
Don't forget to assign your users