Not now, not ever: Ten years on from the misogyny speech

Ten years on from the speech that stopped us all in our tracks – Julia Gillard’s Misogyny Speech. Where were you then? And where are we now?

“Then it was done. After staying silent, I’d had my say. At no time did I feel worked up or hotly angry. I felt strong, measured, controlled. Yet emotion did play its role in the energy of the speech. The frustration that sexism and misogyny could still be so bad in the twenty-first century. The toll of not pointing it out.”

On 9 October 2012, Prime Minister Julia Gillard stood up and proceeded to make all present in Parliament House that day pay attention – and left many of them squirming in their seats. The incisive ‘misogyny speech’, as her words came to be known, challenged not only Leader of the Opposition, Tony Abbott, on his words and actions but, over time, all of us. How had we come to condone the public and private behaviours of some very public men?

With contributions from Mary Beard, Jess Hill, Jennifer Palmieri, Katharine Murphy and members of the Global Institute for Women’s Leadership, Julia Gillard explores the history and culture of misogyny, tools in the patriarchy’s toolbox, intersectionality, and gender and misogyny in the media and politics.

Kathy Lette looks at how the speech has gained a new life on TikTok, as well as inspiring other tributes and hand-made products, and we hear recollections from Wayne Swan, Anne Summers, Deborah Mailman, Cate Blanchett, Brittany Higgins and more on where they were, and how they first encountered the speech.

While behaviours may have improved since the misogyny speech, there remains a way to go and Julia Gillard explores the roadmap for the future with next-generation feminists Sally Scales, Chanel Contos and Caitlin Figueiredo to motivate us with that rallying cry: Not now, not ever!

Julia Gillard was the 27th Prime Minister of Australia and the first, and only, woman to serve in that role. Since leaving office, she has dedicated her time to advocacy, governance roles and writing. In 2021, Julia was appointed Chair of Wellcome, a global charitable foundation based in the UK that supports science to solve urgent worldwide health challenges. Julia is also the founder and inaugural Chair of the Global Institute for Women’s Leadership at King’s College London and Chair of its sister institute at the Australian National University. GIWL strives for a world where being a woman is neither a barrier to becoming a leader in any field, nor a contributor to negative perceptions of an individual’s leadership. In 2014, Julia joined the Board of Beyond Blue, one of Australia’s foremost mental health awareness bodies, and has served as Chair since 2017. As a lifelong advocate for increasing access to education, especially in developing nations, Julia was Chair of the Global Partnership for Education from 2014 to 2021. Julia wrote My Story, a memoir based on her experience as prime minister. Her second book, Women and Leadership: Real lives, real lessons, co-authored with Dr Ngozi Okonjo-Iweala, explores the challenges women face in leadership. 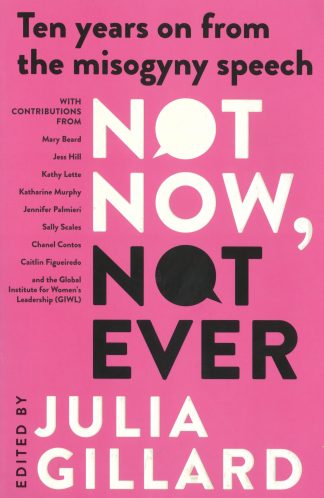 You're viewing: Not now, not ever: Ten years on from the misogyny speech $34.95
Add to cart
Don't forget to assign your users